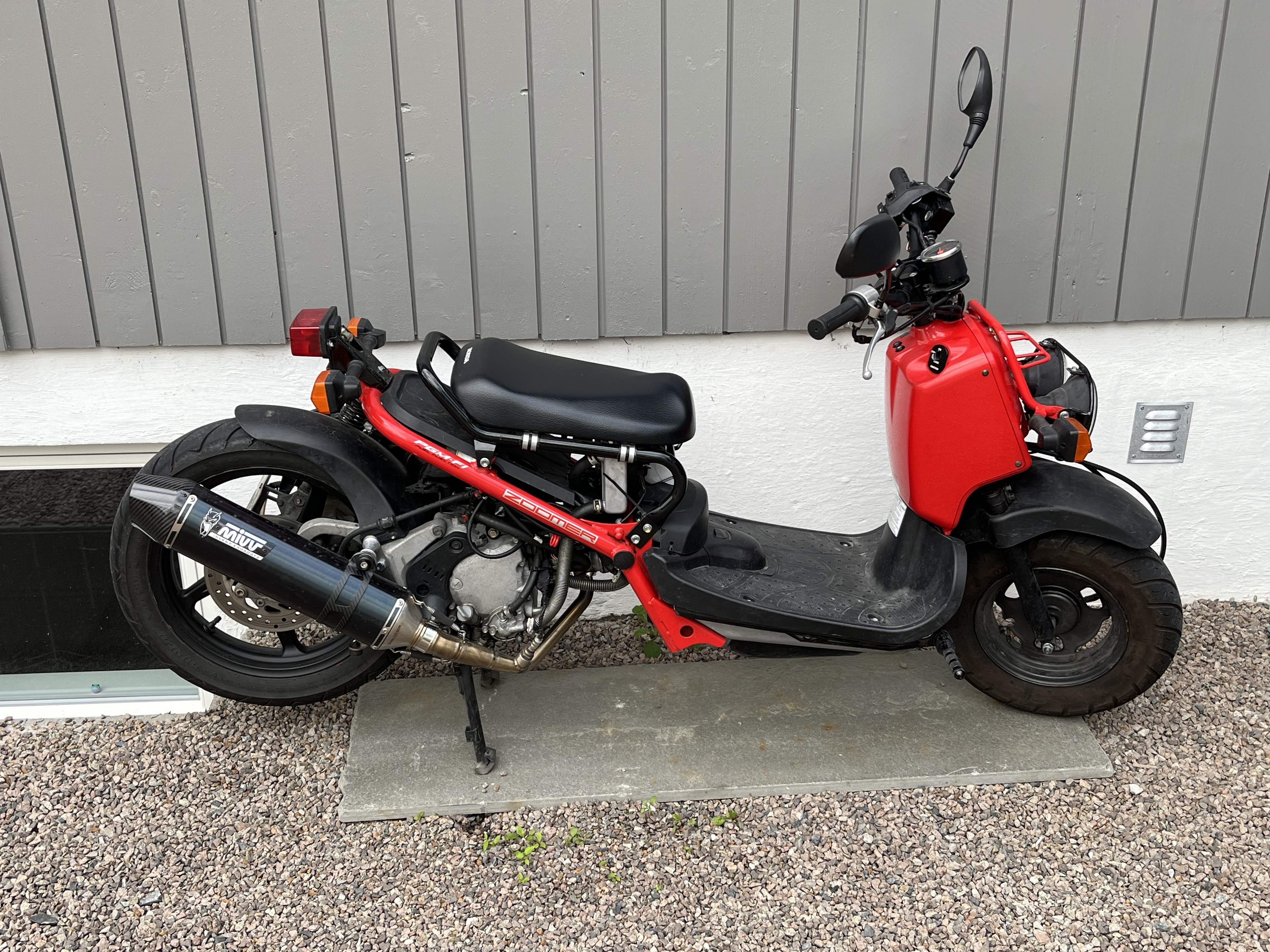 Not Mazda or car related but ..

I have previously owned several motor cycles, but after some close calls and simple math I got rid of them and decided to only do cars. In 2019 I got a sudden urge for riding something on two wheels again but nothing performance oriented. Just for commuting and fun.

The Honda Zoomer (Ruckus in the US) has always been on the radar with it’s simple utilitarian looks and huge after market tuning and styling scene. The EU/JDM version branded Zoomer also has EFI and works just like a port injected car.
So I got a 2006 and was just hooked on how cool and usable this little thing is for commuting and just general moving around in the city. 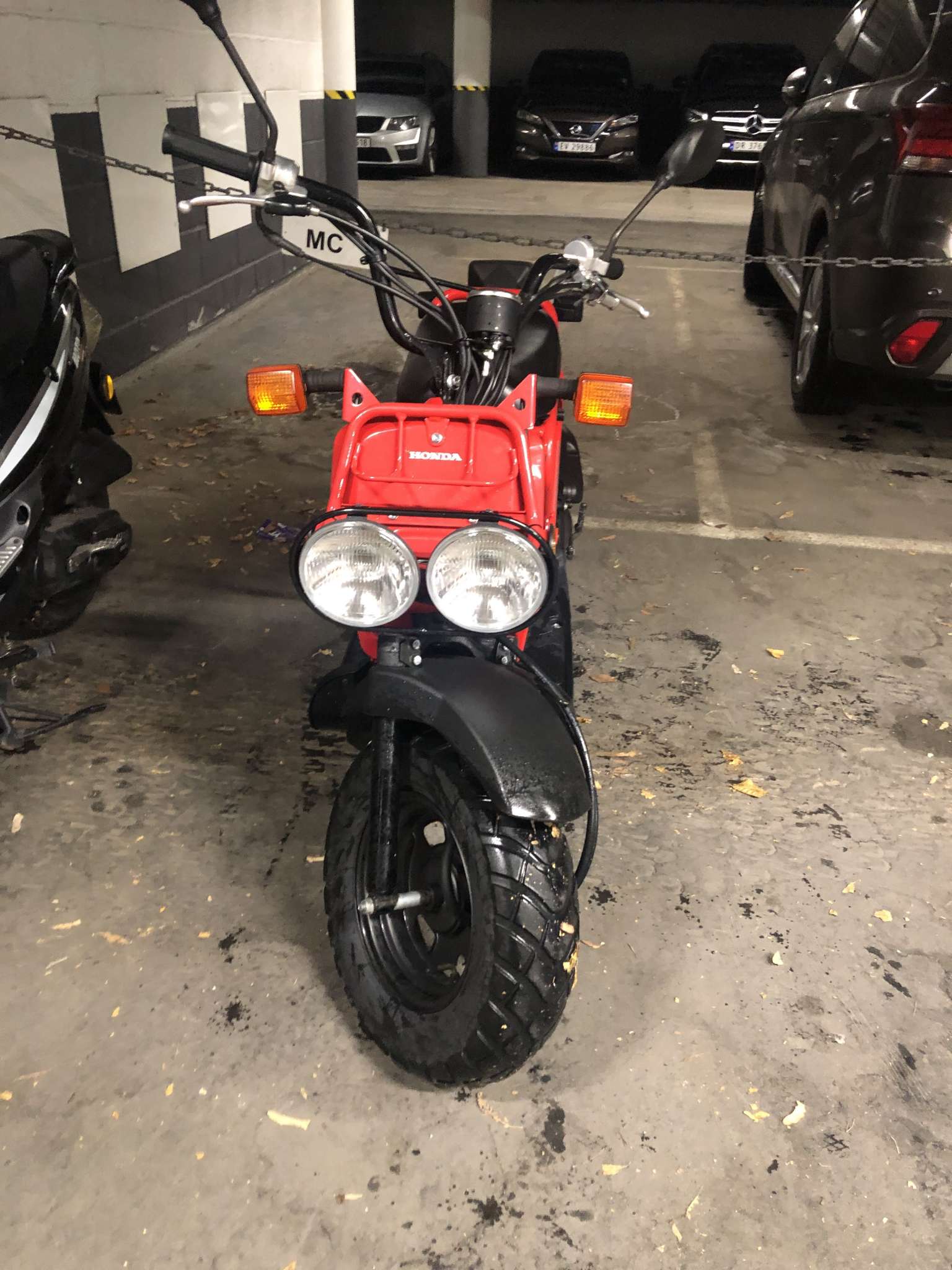 It already came with a Polini variator, muffler and CDI so it was already “fast” in 50cc terms. But the best mod ever was actually to fix the gearing with a gear set from a Honda Met. This made both acceleration and top speed better. 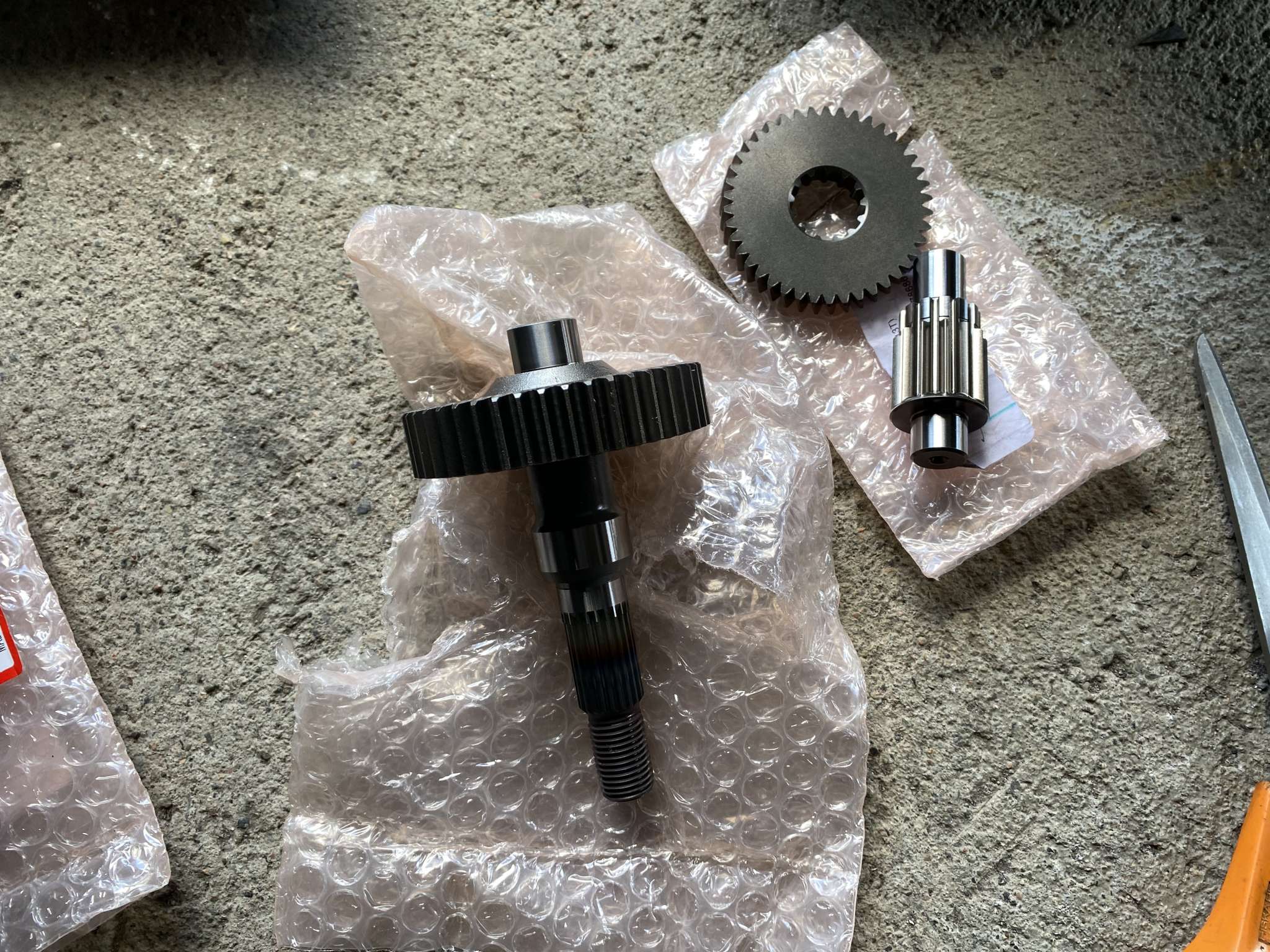 But even with the extra omph I could not hit more than 55 km/t on one of the longer uphill stretches on my daily commute (80 speed limit). Getting more juice out of the small 50cc is hard. There is a 58cc big bore piston available and larger valve but with modest power increase.

I did have a go at turboing it but it ended at the prototyping stage as I was not able to generate enough exhaust flow to get boost. Also it is almost impossible to safely tap the block for a pressurized oil feed so had to just gravity feed the turbo during testing.

After the failed turbo endeavor I decided the only sensible option is to swap the engine for something bigger. The go-to swap is the GY6 engine. But with all the required mods and supporting parts combined with expensive unreliable Covid shipping I decided to get a complete donor scooter locally, preferably a Honda 125. Also the base GY6 stuff is not that good or refined compared to the smooth Honda GET engine and other more known brand scooter engines. And there is no way I’ll go back to a carb.

After some googling i found that the Honda PS125i actually has the same GET engine architecture but in a 125cc guise. The components like the TB and exhaust look the same only bigger. Wheels are also not huge like the SH. 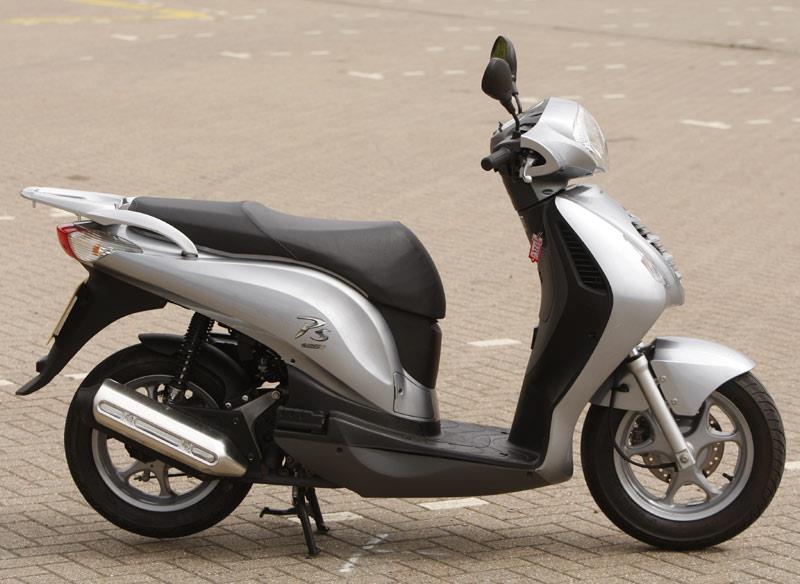 It is common in the UK and NL but rare here in Norway so i looked at other 125cc options.
The most common Honda 125cc scooter here in Norway seems to be the SH 125 with the 16” wheels and the PCX. The latter having the engine mount on the underside of the engine. The most promising swap looked to be the EFI Honda S-Wing which has the same engine as the SH but with smaller Zoomer sized wheels. That space ship is pricey though if you can find one.

By chance I stumbled upon a pretty cheap SH150i for sale. It had been involved in an accident where multiple panels were cracked. At the same time I found some Honda S-wing wheels for sale so the plan was to use the SH150i engine,harness and electronics with S-wing wheels on the Zoomer so I bought both. 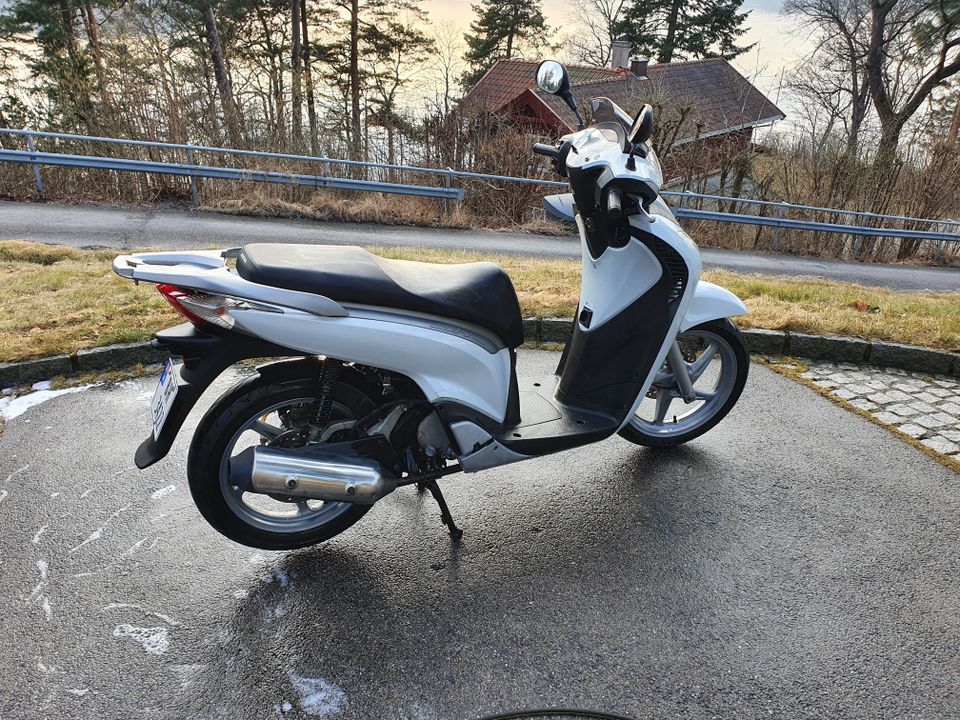 Before I tore down the SH I used it for a week driving to work.
The brakes are really good! 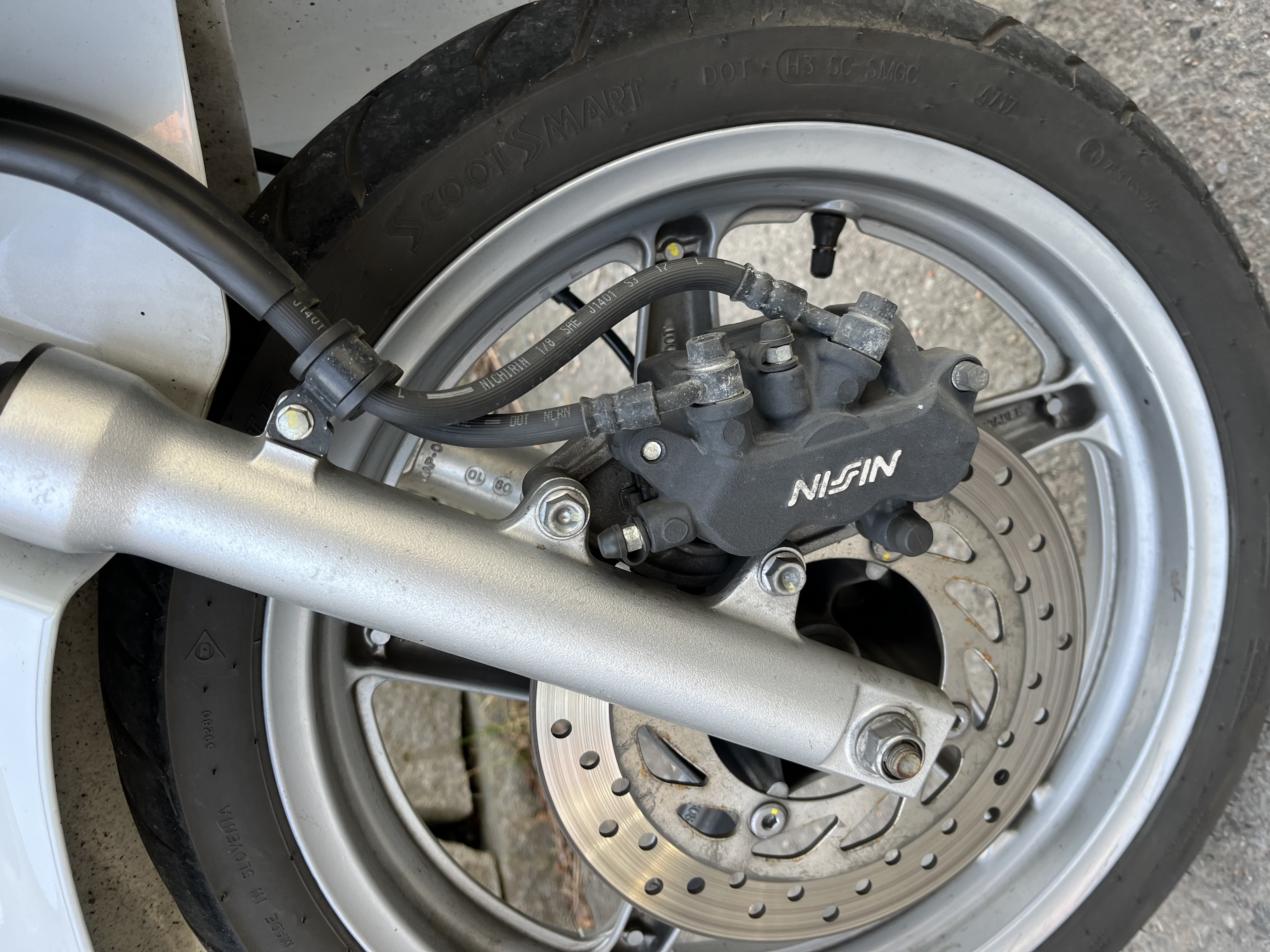 Also the acceleration from standstill is arm stretching fast compared to the GET. The CVT is optimally tuned from the factory where it jumps up to torque peak RPM and then stretches out into optimal gearing all the way to 110 km/t. But the looks of this scooter is plain embarrassing compared to the Zoomer. There is simply no way to make this scooter cool or good looking. 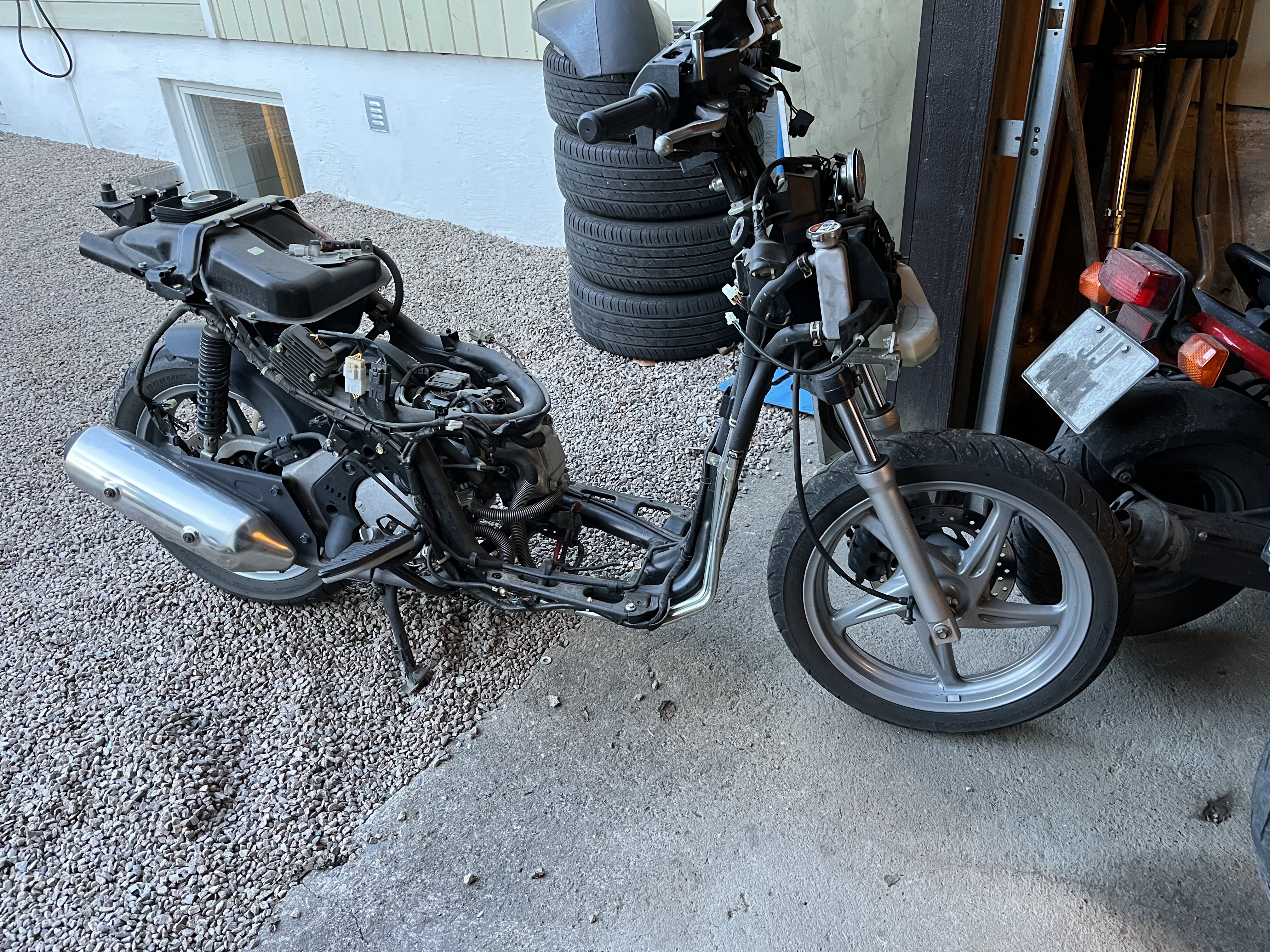 The major differences in layout/architecture is:

The engines share the same layout for TB, intake, gearbox, exhaust.
The SH has disc brake(s) and a rear engine brace/fork.
My plan to use the S-wing rear wheel did not work out as the support brace/fork and the rear axle is different.
I looked into buying those parts but it gets expensive since you also needs the taller gearing for the smaller wheel. Might revisit this if I can get hold of a S-wing engine unit.

The engine mounts are very different but shares the same tab spacing on the engine side. The stock Zoomer mount can not be used due to the size of the SH engine it will protrude into the fuel tank area.

After some measuring to confirm the centering of the wheel would be OK I took a chance that the Rolling Wrench GET stretch mount would fit. Since it comes with 3 different lengths and is metal there is some room for adapting and welding. It turned out to work right out of the box with just some shimming with washers and minor tweak on the shock mount to move it further to the center. Early mock up with the RW mount.

I would have liked less stretch, but not possible due to the frame brace and huge rear wheel.

Also the empty space behind the fuel tank can be used for the SH battery and tray.
The Zoomer fuel tank and pump are kept as is but the injector was swapped out for the SH part.
According to the WSM both the Zoomer and the SH 150 has the same 50psi fuel pressure. (and it has been working perfectly) 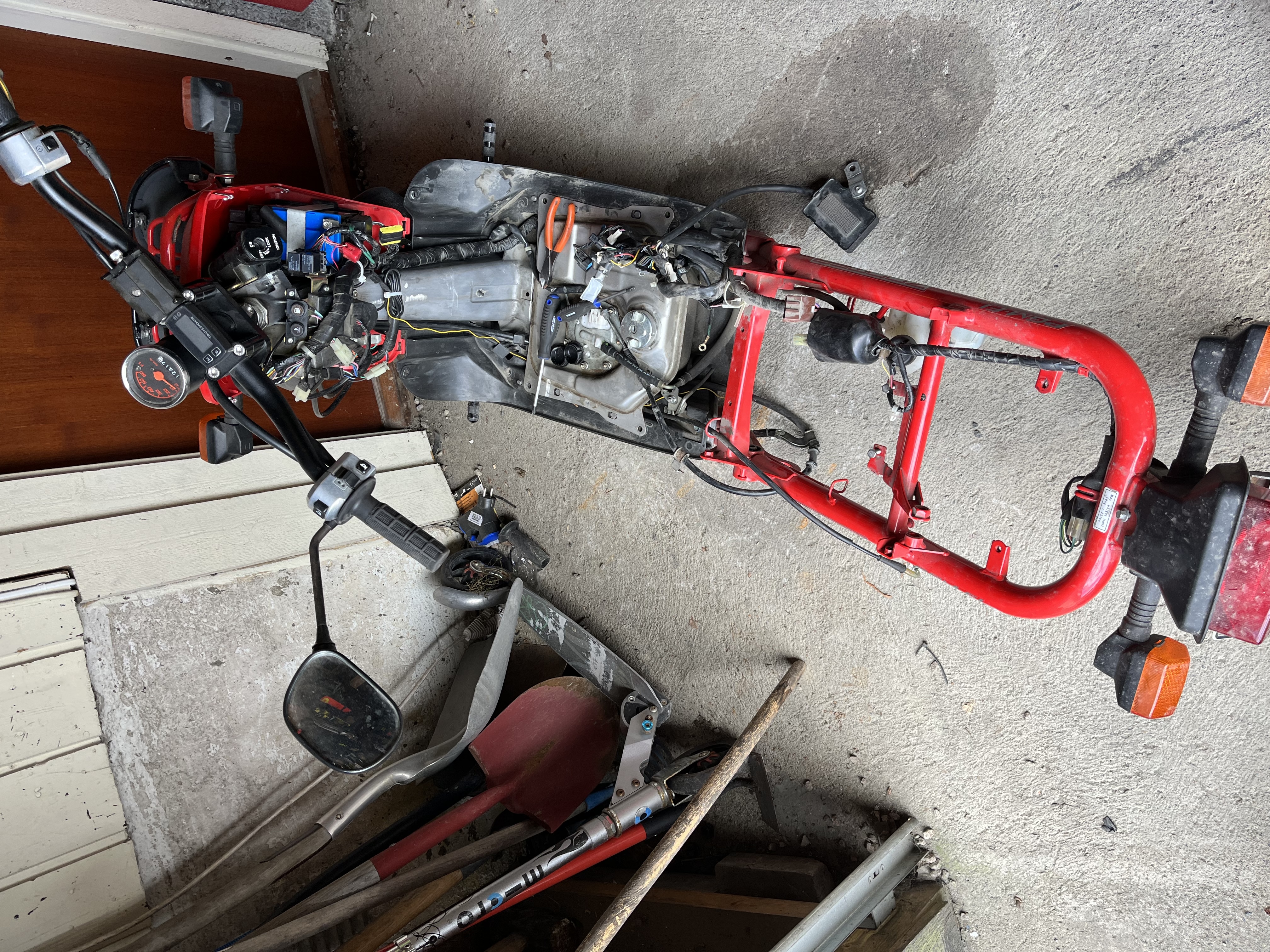 The wiring harness was moved over from the SH. Some cut&splice needed to use the Zoomer switches, ligths and markers.
Luckily the chunky instrument cluster is not needed. All engine and relay control is done elsewhere.
The hydraulic brake line for the rear wheel fit with some bending.

Another pleasant surprise was that the radiator and coolant overflow fit under the seat/floor pan for a very stealthy and OEM look imho. The cooling works great with plenty of flow under the seat frame. Radiator fan only kicks in when stationary. 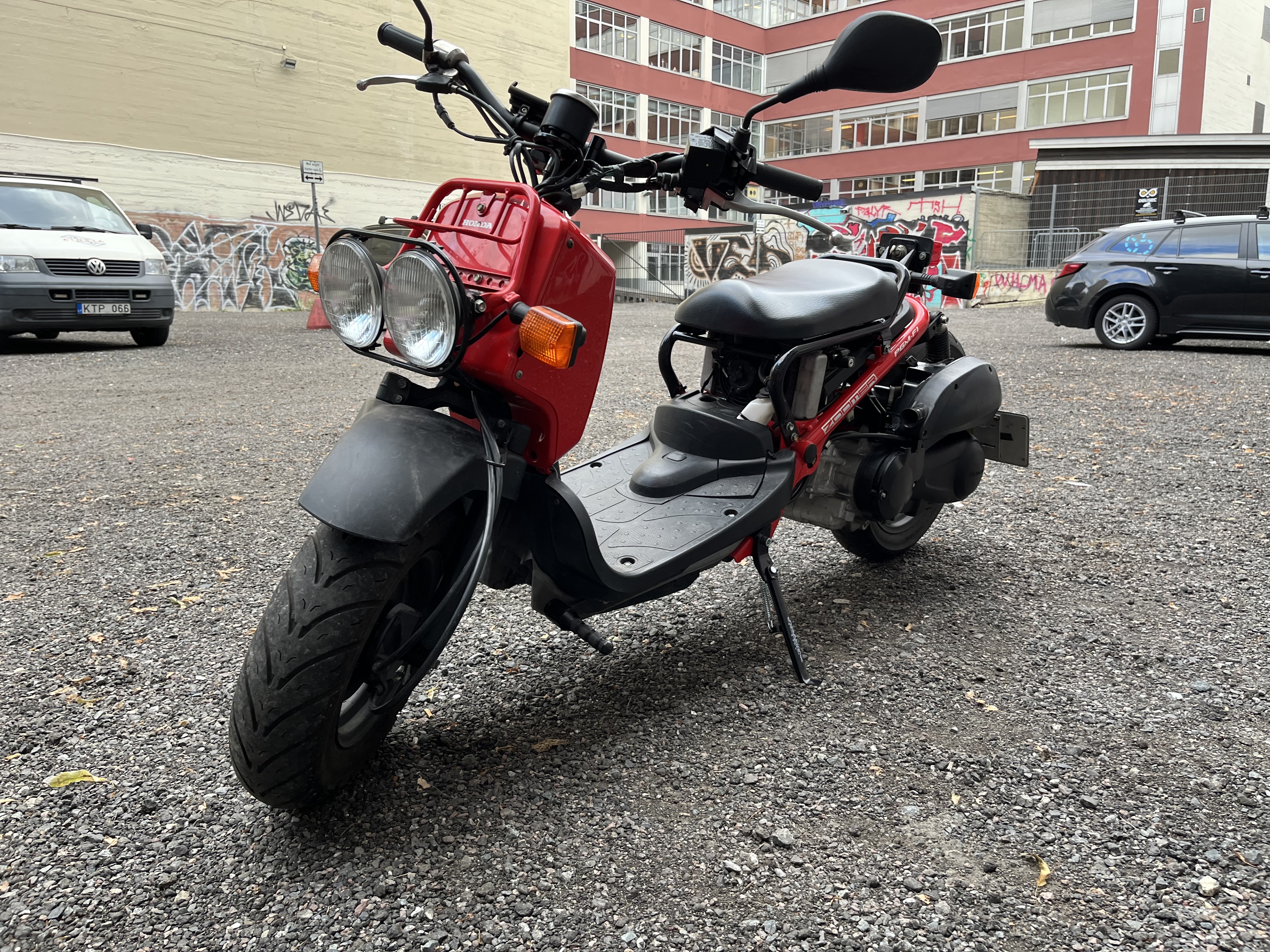 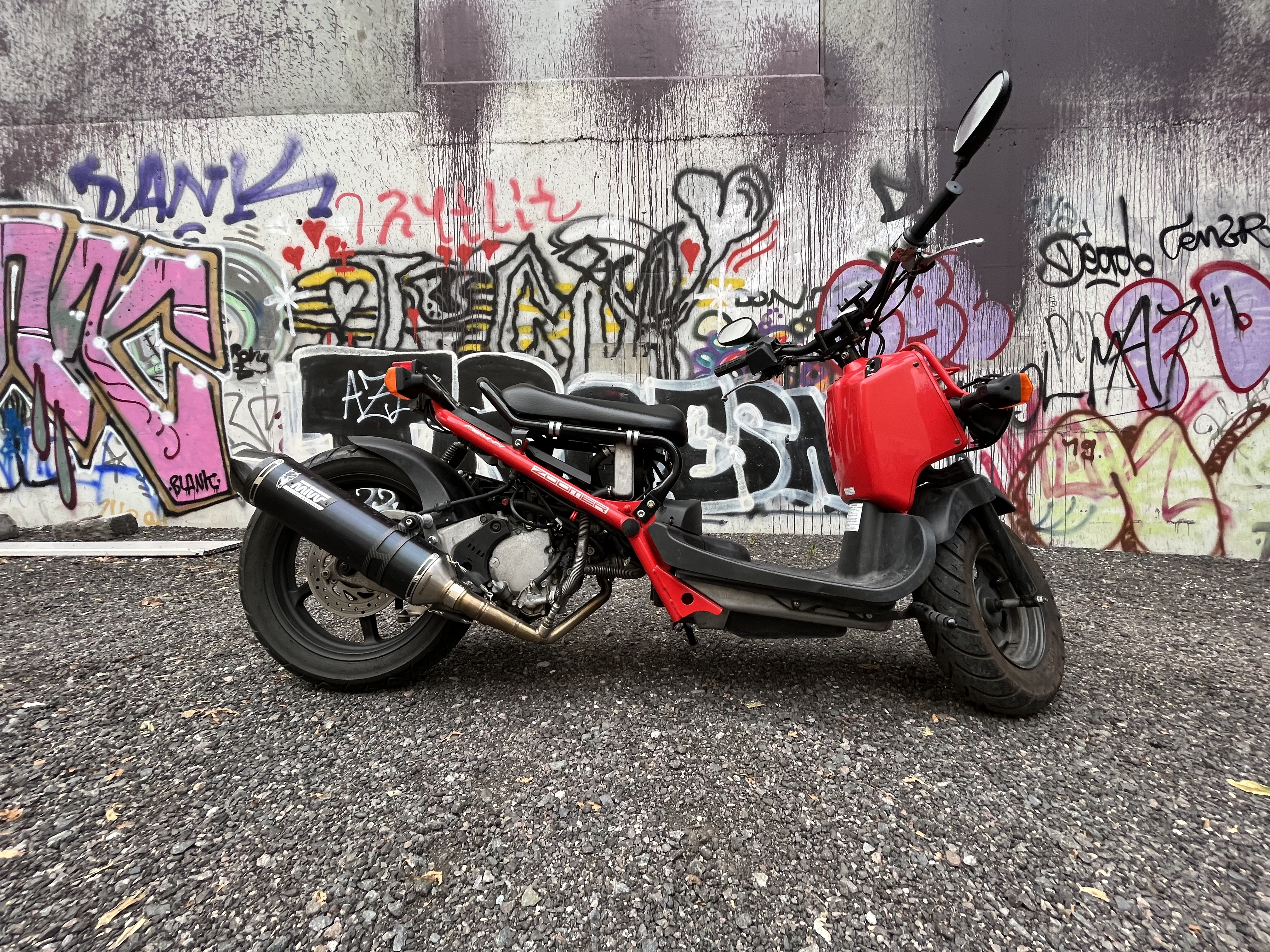 I tried keeping it as stock looking as possible to not draw too much attention. So floor pan, mirrors, markers etc. stays. Would have kept the SH exhaust as well but it was beyond ugly with the Zoomer frame. I used a single rear shock from the SH which works great and is much better quality than the stock rubber one.

This swap really transformed the Zoomer into a weapon. Fast, nimble and light weight. Most of the weight is kept down low. The rear wheel is a bit too much but it helped painting the wheel and CVT cover black. Upping the wheel size up front will help too I hope.

Next step is to adapt the SH fork to fit the Zoomer frame. It has the same size threads and stem length as the Zoomer but it tapers out to a larger diameter bearing at the bottom. Will check with a machinist if it’s possible to turn it down or weld in the Zoomer stem. I’m not interested in the Ruckus aftermarket forks as I want to reuse the SH brake hardware including mounting points and the S-wing wheel. The forks are also much longer so I’ll will need to sacrifice most of the travel by possibly using Zoomer springs. 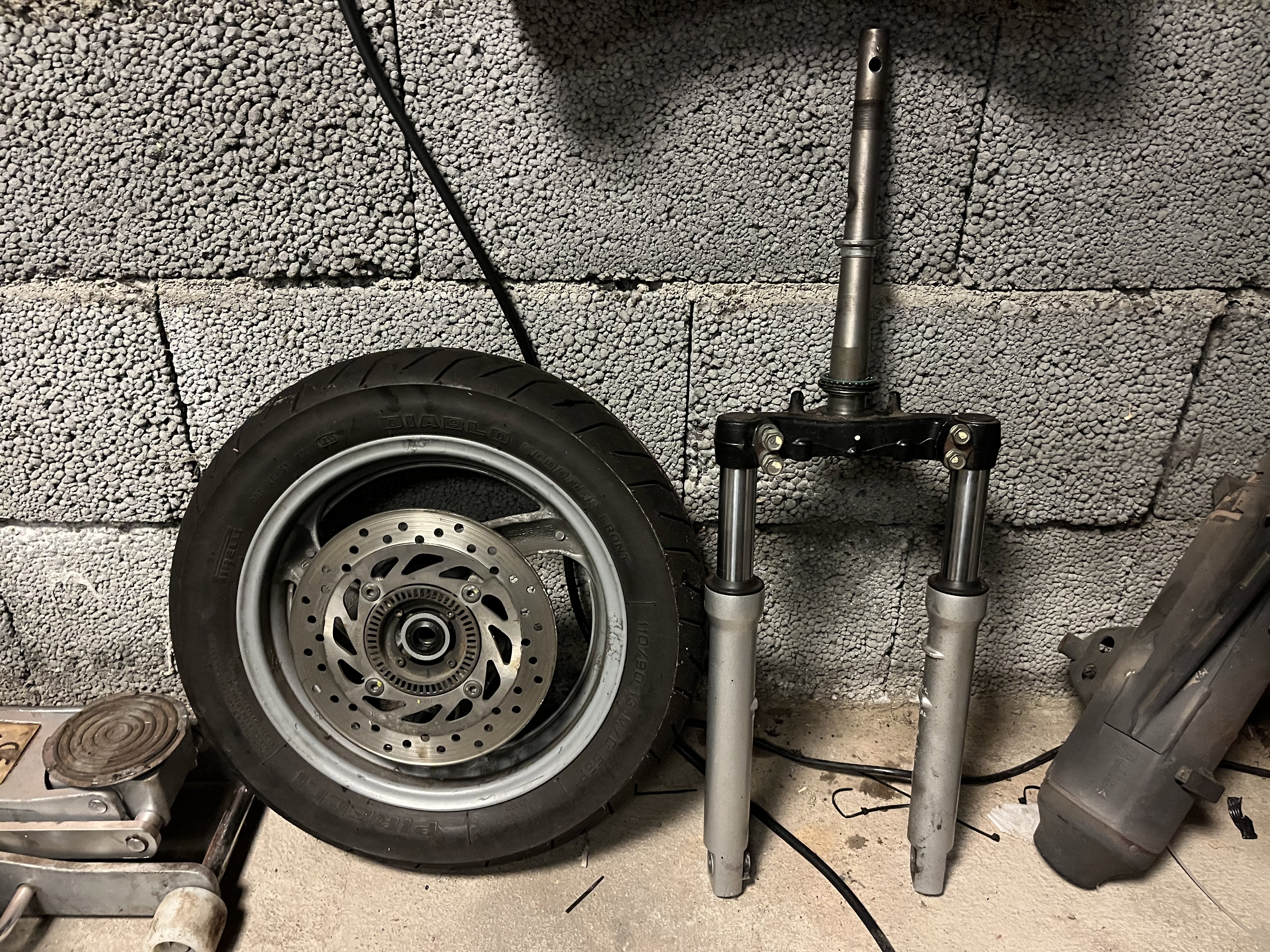