This article was originally posted on miata.net

I logged some temp and pressure data during a trackday back in May 2021.

(Use CTRL+ or “Open in new tab” to zoom graphs)

Graph for single lap.
Highlighted section is a long sweeper after a hill combining both braking + sustained 1.3-4 lateral g’s.

My thoughts:
NC oiling system is very good from the factory. Oil pressure is solid under sustained 1.4G cornering and heavy breaking.
Pressures goes down with oil temp which is normal but might be less with a better oil but still inside Mazda’s spec of 49.0-85.8 psi >3K RPM.
Oil temp rises with coolant temp since it’s the stock oil cooler/exchanger.
I see the same coolant and oil temps during 25C ambient as well, even with FI.
Running 115C oil temp is inside operational limits for pretty much any synthetic oil out there . For my use I will not touch any part of the stock oil system/baffling/cooling unless my upcoming aero changes things.

The only part I don’t like is that the AEM Infinity VVT control was off by 5 deg when oil got hot. Need to check if it can be compensated or if I’m missing some closed loop parameters in the AEM. 5 deg off on VVT is a lot of power. 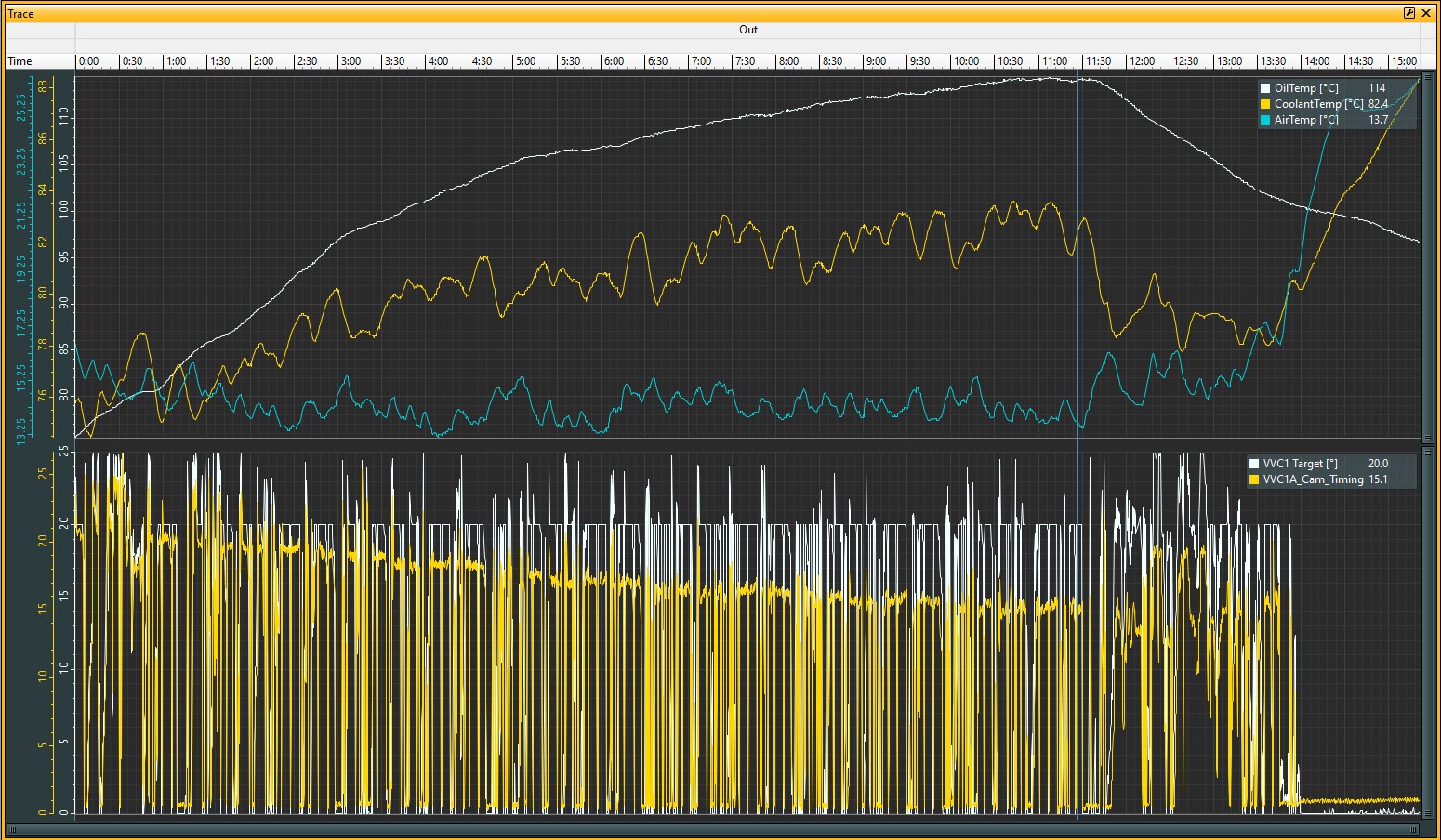 Regarding external oil coolers I would be very careful just bying whatever the vendor has pieced togethter from the Chinese parts bin. Pegasus Racing has a great primer on what to consider Choosing and Using Engine Oil Coolers.

Since people don’t read links these days I’ll highlight the piece of information everyone needs to know:

Using real numbers, with a 10 GPM flow rate as an example (not uncommon for an engine running 6000 - 8000 RPM), the 20-row Series 9 will introduce a 5 psi pressure drop from inlet to outlet. (Note that a single 90 degree fitting in your oil line could cause more restriction than that.) The 25-row Series 6 will cause a 2.6 psi drop. The Series 1 will show less than a 1 psi pressure drop. The flow restriction from the Series 1 option may not even register on your oil pressure gauge.

Worst case is when people try to mimic the RX7/8 twin coolers which was designed with this from the factory. Coolers in series with plenty of 90-bends which potentially could rob half the oil pressure from the pump depending on the components used. Another thing worth considering although much less impact is forced induction and resulting crank case pressure which also robs psi from the pump. One of plenty reasons why dry sump systems exists.