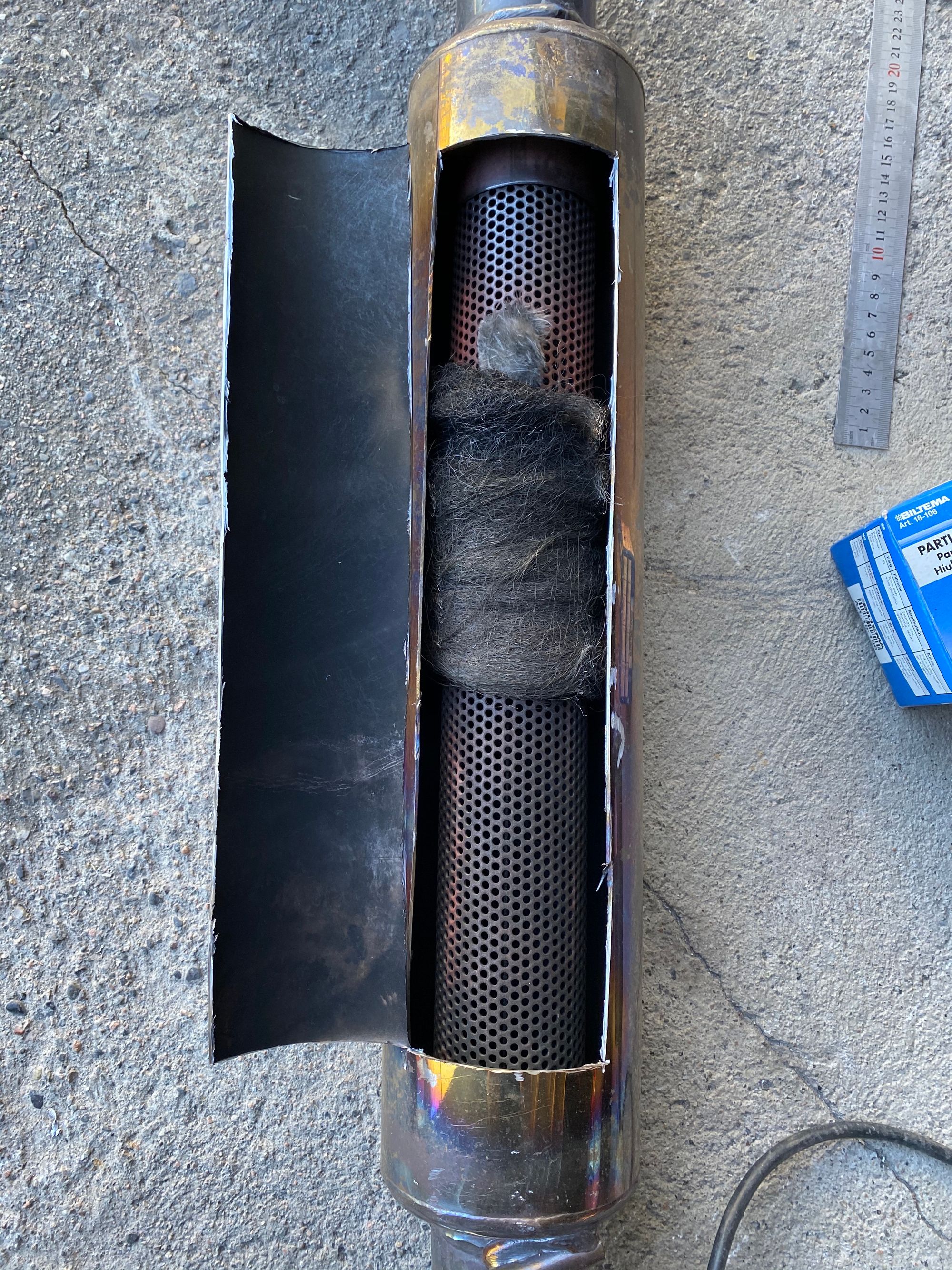 My GWR 2.5” midpipe was put on the shelf some years ago as it started to have terrible  resonances between 3-4K and generally too boomy for any kind of driving.
Knocking on the resonator with a wrench gave a hollow tinny sound so whatever they put in there of dampening has been burned out.
It lasted  5 years (summers) with my kind of driving, which is mainly track days including driving to/from track + 3 Nurburgring trips. Most of them with a FMSC at different boost levels. Not impressed, not surprised. Packed glas mat/fiber mufflers will burn/blow out eventually.

My plan was/is to replace the resonator, but just for fun I cut open the existing one:

LOL. The white stuff is what’s left of the fiberglass dampening material. The thick band of stainless steel mesh seems to have been a protective inner layer that initially covered the whole length of the perforated core but have now been compressed to a dense band in the middle.
I guess when this layer starts to loosen at the ends the glasmat packing material above will start to deteriorate pretty quickly

This was in april during peak COVID19 pandemic lockdown in Norway so I needed a mindless  project to keep sane. Repacking this resonator seem like a good idea at the time since the innards was in good shape.
Shippingtime was pretty much useless across borders so I had to source stuff locally.
I was not able to find any kind of stainless wool/mesh or stainless scrubs anywhere.
Just to get things done I repacked it with bike muffler packing from biltema.no directly on the inner core.
I used SS rivets to bolt on a sheet of mild steel plate with plenty of exhaust paste.

Those SS rivets were a lot of work. Way harder than alu so my hands was knackered for days. I used a bunch of worm clamps to clamp the metal sheet down while drilling the holes.

I had low expectations for this to work, but it was pretty much free except for the packing material.
On the street including redline pulls and general shenanigans it was working well. No ricer metall singing  boomyness as before. I used it with a GWR street single so it was easy to hear the difference.

Later when the pandemic eased off I attended trackdays again with the repacked midpipe.
At the end of the second trackday the brain piercing resonance inside the helmet was starting to return so I expect some of the packing material has already been burned off without the protection of a more durable inner layer.
The difference between doing some pulls on the street and doing 15-20 min WOT sessions on a race track is not comparable. The sustained exhaust temperature, back pressure and unburned fuel going trough the exhaust can not be replicated so it would probably have held up much longer for normal use.

What surprised me though is that my riveted patch panel worked great. No leaks.
So with proper packing material with a SS mesh inner layer or just SS scrubs as can be found here https://burnsstainless.com/products/muffler-repack-kits  this would work without TIG welding. I’ll eventually replace the resonator with a Simons unit as well as a race CAT. Just got a TIG welder so it will be a nice project.
Currently using my IL Motorsport CAT’ed midpipe which has held up great with similar treatment so far but at the cost of some ponies due to slightly smaller ID.