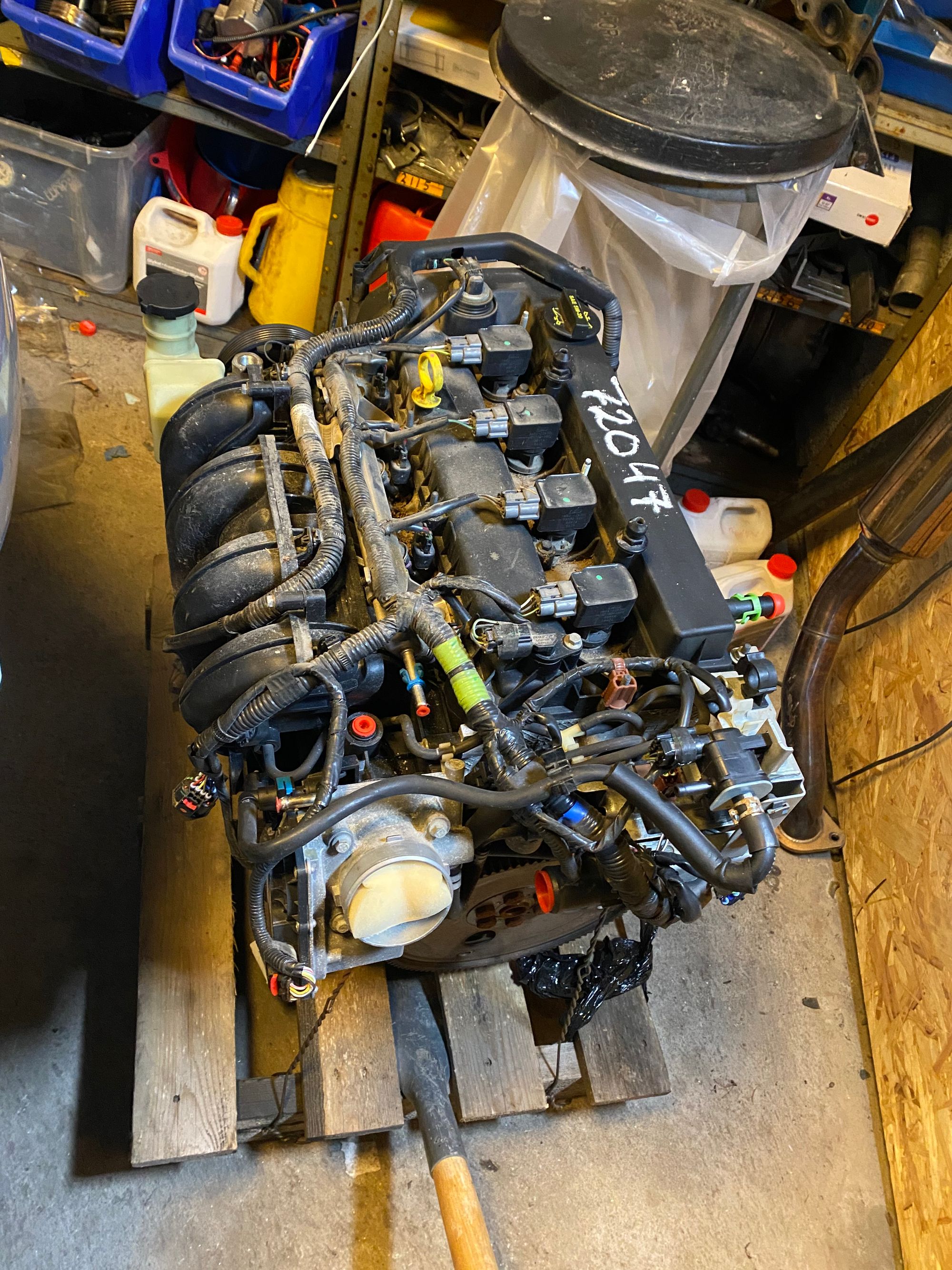 As mentionedhere I need a more reliable engine setup than what has been going on for the last 5 or years or so. Pushing 15 psi of boost trough a stock MZR is not reliable for track use according to my impressive collection of broken engines.
So the supercharger is sold and I have now got hold of a well broken in 2.5l L5-VE from a Mazda6 Sport out of a Swedish wrecker. Cost a small fortune compared to the low mileage sub $500 L5’s available in the US as this is exotic stuff here in Scandinavia.

Why the L5 ? Availability and power out of the box. A 2009+ NC 2.0 would be my first choice but finding one in Norway is highly unlikely. Might have something to do with 9x% of all NC sold was the EU only 1.8 non VVT MZR. Shipping across the pond has been crazy expensive now during COVID19 as well and in Norway you have to pay tax on shipping = +++ everywhere.

I don’t even particularly like this engine because of the agricultural 1.51:1 R/S ratio making it a dog above 6K by design.  Not sporty compared to the MZR 2.0 which keeps pulling to 7500 even with stock cams.
Yes, the L5 power band can be fixed with the recently released cam offerings from Esslinger, but piston speed and resulting friction/load on the internals at 7500 is comparable to  spinning the 2.0 to 8500 rpm… .

Tuners on m.net is using any opportunity in the forums on m.net to market the L5 as the ultimate MX5 engine swap with ridiculously inflated power figures. Like 200+ whp while it in reality would do about 160whp stock and 185-190 with cams and higher CR pistons.
I can only speculate, but it might have something to do with them making good money reselling cheap junk yard L5’s for 3x / ~$1500 not even including the MX5 pan and crank pulley.

But lets save the “Everything that’s bad with the L5” post for later.
It has some good attributes:

Also I do have a full set of +0.5 forged pistons and H-beam rods from a unfinished/failed previous engine build that is plan B if this lump should turn out to be bad.

I’ll try not to do anything stupid like cams or ITB’s with this one and focus on maximizing track time. Will do tuning with the AEM starting from stock timing and VVT map if such a thing exists since they use a different ECU than the MX5.
I’m also crossing my fingers that I can tweak it to run without CEL’s on the 1.8 ECU for the 15 minutes needed for the upcoming inspections. I might even try to use the L5 injectors.
Thanks to IND over at m.net I have a milled front cover and a lowered engine mount so it would look pretty stock in the engine bay for the visual.