Water Injection - or how to fix a roots supercharger. 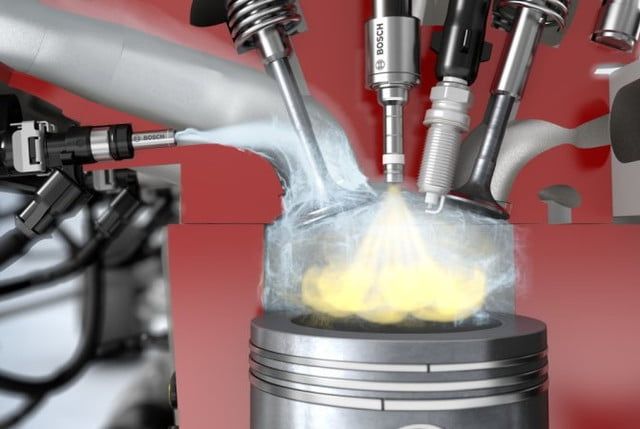 2021.02.26 : Sold my supercharger but the info in this article is relevant for any kind of forced induction

Ref. my earlier post on supercharging compressor efficiency my Gen 4 MP62 based FMSC supercharger has a very low compressor efficiency of 50% which results in charge air temperature as high as 80C with the stock IC setup and a 2.8” pulley on the track .‌‌‌‌I have done some major upgrades to both the IC pump and heat exchanger to keep IAT’s in check but initial testing shows it’s still 30-40C above ambient. I suspect it will hit +50C over ambient when pushing it max at the track.‌‌‌‌
Next step:  Water Injection.  ‌‌

This has always been on the list but I got a new found interest in the topic when I watched the results Banks power got using WI on a roots super charged diesel V8 :‌‌

‌‌His videos are super long and nerdy but there are some good information in there that are relevant for non diesel as well, like his constant preaching on air density  > boost pressure.‌‌‌‌
So, what does water injection do ? From wikipedia:

‌‌In a piston engine, the initial injection of water cools the fuel-air  mixture significantly, which increases its density and hence the amount  of mixture that enters the cylinder. The water (if in small liquid  droplets) may absorb heat (and lower the pressure) as the charge is  compressed, thus reducing compression work.[1] An additional effect comes later during combustion when the water  absorbs large amounts of heat as it vaporizes, reducing peak temperature  and resultant NOx formation, and reducing the amount of heat  energy absorbed into the cylinder walls. This also converts part of  combustion energy from the form of heat to the form of pressure.  As the water droplets vaporize by absorbing heat, they turn to high  pressure steam. The alcohol in the mixture burns, but is also much more  resistant to detonation than gasoline. The net result is a higher octane charge that supports very high compression ratios or significant forced induction pressures before onset of detonation.‌‌

Executive summary: ‌‌Mix a fine mist of water into the intake air and it will :‌‌

How much will WI cool the intake charge ?‌‌
Actually quite a lot according to this 2017 OSR-JMCE scientific paper :‌‌
Experimental Study on the Effect of Water Injection in an Internal Combustion Engine ‌‌‌‌
Summary: ‌‌2.5l diesel engine steady state 3200 rpm 2 bar absolute (1 bar boost)‌‌
Before WI: 60C IAT‌‌
With WI: 30C‌‌
50% reduction in IAT !

This is just what I need.  Shed 25-30C off the IAT.‌‌
And the resulting air density means more power. ‌‌But there is a catch for supercharged engines that are driven by the crank.‌‌‌‌‌‌
Lets look at the ideal gas law and what I could expect on my setup.

Without doing any actual calculations we can see from the rearranged formula that a lower IAT  (T) will increase number of air molecules (n) as long as boost (p) is the same.‌‌For a supercharger the pressure will actually go down as well since the lower IAT’s makes the charge air denser. The supercharger is driven off the crank and is compressing the same volume of air per revolution compared to a turbo which which will compress whatever volume of air needed to reach the boost target set by the boost controller.

So, to fully take advantage of WI on a supercharger we need a smaller pulley to get the boost back up to pre WI levels, but this time with a higher air density.
I already have boost control implemented on the SC with the AEM so a 2.7” pulley or even a 2.6” is possible and still be able to run lower boost settings.

So.. that’s pretty interesting. Looking at some of the vendors of WI kit’s and their recomendations:
Devils Own recomends 15-25% of total fuel flow.
Aquamist says 10-15% of total fuel flow for water.
AEM’s smallest nozzle insert is rated to 250cc
RB Racing says 160cc for 300hp.

I don’t recall mye injector CC at 1 bar on the 2.5l FMSC setup but pretty sure a set of 440cc injectors are close to maxed out that point= 4 x 440 * 0.15 = 264cc
A tad over over the 136.5 cc from the test. Also this is the peak needed cc, so if you spray say 250cc from 4K and up you are probably way overspraying in the midrange.
I would start off with the smaller number and increase until temps stops dropping.